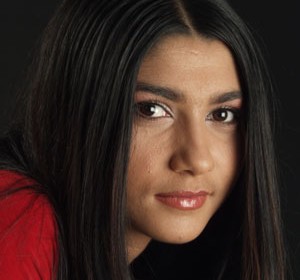 Sissi Atanassova is a 24 year old gipsy singer, really successful in Cialga clubs in Bulgaria, where her voice accompanies typical Balcanic sounds and the nights of the belly dancers. During one of these nights, in Sofia, we discovered the persuasive force of her singing. When Sissi’s telling stories about her life and her way to be an artist, she takes on a sort of mystic air, unusual for people from her ethnicity. She was born from a very poor family in a gipsy suburb near the city of Sliven – Zlataritza, in the center of Bulgaria. One day, at school, the teacher announced to the students that in the afternoon they would have a party, with music and dancing, and requested everyone to ask after their parents for some money to cover the expenses. Sissi knew it was useless for her to ask in that period and she was really sad and wondering how it could be possible to be so poor. She left home crying and she went to school anyway, determined to go to the party. On her way, all of a sudden she felt that her feet were like stuck to the ground. She couldn’t move.She couldn’t keep her eyes open either, but she wasn’t frightened because that was a nice feeling. She could feel a strong wind through her body and she perceived more and more vividly that something was glued under her feet. Then she opened her eyes and looked around trying to understand what had happened. When she lowered her eyes she saw a 5 leva bill (a lot of money for that time) under her shoes. She picked it up and for the first time in her life she praised the Lord even if she didn’t know exactly who the Lord was.She immediately went to a confectioner’s and bought her favourite sweets and then she went to the school party.Since then, Sissi grew up with a deep religious feeling, with a strong faith in God because she felt helped and guided in her artistic and musical talent. Her dream since childhood was to live in Italy and to take part in an Italian movie. At the age of 22 she actually was invited to Milan to record her voice for the song Bum Bum Boje (track 1) and for the vocal Improvvisazioni, in Rom language, included in the original soundtrack composed by Giovanni Venosta for the movie Brucio nel vento directed by Soldini. While Bum Bum Boje was becoming a hit, thanks to the choice of Radio Popolare (a big alternative network based in Milan) to use it as a signature tune, Sissi had other possibilities to visit her dreamland, for the launch of the movie and for her first gig in Milan in December, 2001. Sissi Atanassova started singing as a child, listening to a man living next door playing keyboards. She went often to his place to sing, until they started rehearsing for some gigs. They brought keyboards and amplifiers in the courtyard and people started to flock listening to them. Everyone was really surprised to see little Sissi sing. After a week in the yard they decided to move in the local football pitch, to play and sing for the whole town. Sissi was asked to play at a lot of parties and she started making money at weddings and baptisms. One day the duo moved in Veliko Tarnovo, the old capital of the Kingdom of Bulgaria, where all the musicians were complaining for the lack of job opportunities and money. They substituted a band in a club, where in a short time Sissi’s voice attracted a lot of Cialga fans and the club constantly gathered the biggest audience in town.