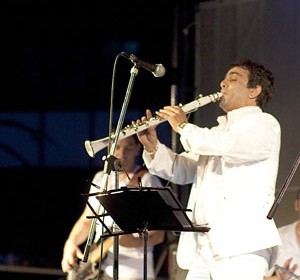 What’s the first thing you think of when you hear the word “Gypsy”? Brad Pitt in Snatch? Or Django Reinhardt? Or do you hear the clip-clop of the wagons, crisscrossing continents since time immemorial? Or a mysterious woman telling you: “Show me your palm and I’ll tell you your future!”? The Gypsies – stronger than the cruelty of the prejudiced world, cropping up again with the doggedness of a crocus in spring – they are back again, hanging on to their untouched culture – music coming from the depths of time, dances that drive the gods wild even today. Here they are – Chalga Band – cheerful, open-hearted, ready to be loved by the world. Living at the crossroads between peoples, in the heart of the Balkan Peninsula, they offer their contemporary take on this historical given. Fiery Gypsy rhythms jolt you like Mohammed Ali’s boxing gloves, the clarinet wraps you in a mystical haze of incense gathered from the East and South, and when the belly dancers take the stage, your legs will carry you there on their own – into the fairytales from One Thousand and One Nights. “I heard new Gypsy music for the first time in Varna – a beautiful Bulgarian city on the Black Sea. One evening in 1994, I was with some colleagues at a night club on the seashore. They were playing rock music. Suddenly the DJ put on something completely different, the chalga hit “Radka Piratka” The whole place jumped up and started belly dancing on the tables. It was then that I felt this new, cheerful energy,” says Paolo Guilini – Chalga Band’s producer and manager. “I had been composing and recording this new music for five or six years already when I met Paolo,” Boyko Petkov says. “He made me believe that people outside the Balkans would like this totally unique music style, too. After the success of our first joint project, Sisi Atanasova’s Bum Bum, Boje, Paolo called me from Milan and said: ‘They want us for concerts in Italy, we need to put together a band.’” Boyko gathered several musicians – mostly Roma he has known for years. They are professionals with proven chops and rich musical histories. And so Chalga Band was born – it has been at the heart of Notti Ludi’s productions for eight years now. Ventsi Radev – drums, darbuka and tupan (bass drum) – has played and recorded Gypsy jazz with some of the most famous names in Roma music. With his subtle articulation and ability to mix styles with ease, he lays the perfect foundation for the band’s music – syncopated Gypsy rhythms which “steal” from the treasure trove of jazz and rock for variety. His percussion unambiguously reveals this music’s geography – Balkan Motown. A central figure in the compositions and on stage is Marin Marinov – a virtuoso on the clarinet and saxophone. Artistic and elegant, with a wink he leads you from Sofia to Tehran to Bucharest – with detours through Athens and Istanbul. “Make the clarinet cry!” Boyko told him. “Put it like that – so I know what you want!” Marin replied – and began telling in tones the ancient stories of a exiled people, of lovers torn apart by fate. But don’t think you’ll get by without accordion – Ventsi Grozdanov backs up Marin’s solos with his unshakable smile, then lets fly a tangle of trills. The temperature shoots up to 400 С. Chalga Band regularly plays with two exceptional guest musicians – the guitarist Nikolay Antov and the kaval virtuoso Nedyalko Nedyalkov, well-known on the world music scene. Boyko keeps the whole picture in focus, fleshing it out with sampled bass lines, a throw-back to his years in rock. “That way the high-flying improvisation knows where to land,” he says. Stop! Can you speak Gypsy? No? Don’t worry. Listen to Petar Yankov’s voice – the words will find their own way to your soul. An exceptionally talented young Roma singer, he will tell you about life in a little house near Sofia, about the warm hearth when it is 15 below outside and snow is falling, but also about his new love, about the noisy, colorful market, and about the wanderer’s eternal longing to reach the stars. “Drink a tequila and forget that girl, my friend!” Petar says. Take his words to heart – he’s a philosopher. Or listen to Greta, who sings: “my lips go kiss, kiss, kiss…” She’s a seasoned Roma singer – a hurricane that no stage can contain. And yes, she has won the “Roma Queen of Music” award. Paolo is the idea man, Boyko composes and arranges these raucous energies. And in the end, they serve them up to us – sharp as a knife, lovely as a flower, fresher than anything in the world, as Saroyan would put it. “This is warm music which reaches people’s hearts,” says Davide Rosa of Edizioni Ishtar. “The Brazil of Europe,” adds Claudio Agostoni of Radio Popolare, Milan. “Do you realize where you are?” Marin Marinov asks. Yes, we’re all 10,000 feet above the earth, flying with Chalga Band towards a world ready to love them. So let me ask you again: What’s the first thing you think of when you hear the word “Gypsy”?