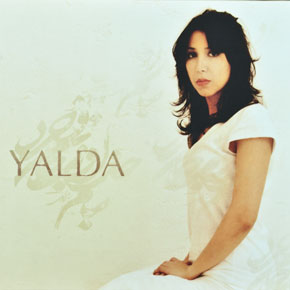 1990. While Fabrizio De Andrè was giving birth to “Le Nuvole”, Prince released “Graffiti Bridge” and was composing “Nothing Compares 2 U” for Sinead O’Connor. At the same time in the turbulent Iranian Islamic Republic the young Yalda was taking her first piano lessons. During her studies she passed a competition which allowed her to subscribe to the University of Music in Teheran. There she started playing the setar (an ancient Persian four-chord instrument similar to the mandolin) and she wrote a thesis about the musicotherapy of the Iranian rural areas. At the age of twenty she took part in the Talar Vahdat’s chorus, one of the most important music scenes in the capital. Simultaneously she was both taking lyrical singing lessons from a singer of the Moscow Philharmonic Orchestra and teaching piano to children at several schools. At the age of twenty-one she won a competition which opened to her the doors of the chorus of the Iranian state-controlled television, participating to concerts and recordings. When she was only twenty-six she moved from Teheran to Italy. There she continued her music studies making use of the Armando Nilletti’s teachings, a guru of the phonology, and she took part in a series of concerts. This intense music activity allowed her, among the other things, to open the African Film Festival (2005), the Philips Collection at Mart museum in Rovereto (2005) and the Venice Architecture Biennial (2006), in collaboration with Raiz, Sissi Atanassova, Tony Tchakarov and Daniela Diakova. In 2007 she recorded the credit titles of “Giorni e nuvole”, the new movie from Silvio Soldini. The proof of her versatile music, which seems to have no borders, is given by the different kinds of location chosen for the performances: from the Hollywood (the discussed Milanese disco) to the Terni Roman amphitheatre, from the stand of a nomad public performance along the valleys of the Oglio river (Odissea) to the stand of the ex- psychiatric hospital Piano Pini (“Da vicino nessuno è normale”). 2008 is the year of her first album created in collaboration with the Bulgarian musicians of the Changra Band. Together they experimented a sound with different influences, starting from the Iranian traditional music and evolving through the Balkan melodies. Among these songs Yalda decided to insert a personal cover version of the song by a musician whom she felt in love with when she moved to Italy. That musician obviously was Fabrizio De André. Claudio Agostoni